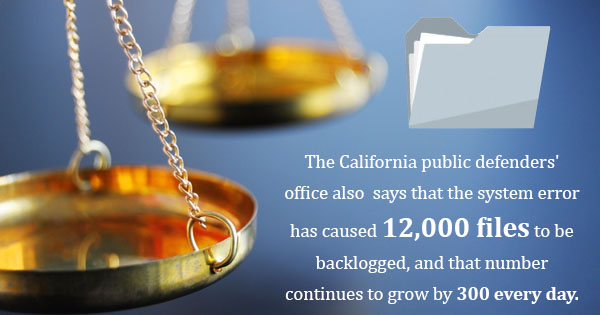 A new legal software system has gone haywire in California, according to a public defense attorney who discovered the bug.

In November 2016, Brendon Woods filed a motion to eliminate the Odyssey Case Manager software until the glitch could be fixed. The software led to mistaken criminal records, unnecessary court trials, listing misdemeanors as felonies, as well as the misidentification of drug defendants, instead filing them as sex offenders.

The new Odyssey system is far different than the old system, likely explaining the number of injustices that were made by mistake. The user interface is so unfriendly that what used to take just two clicks now takes around 25, according to Debbi Pearson, a local representative of the Service Employees International Union.

The California public defenders’ office also says that the system error has caused 12,000 files to be backlogged, and that number continues to grow by 300 every day.

The system is used by 26 court systems in California, and it is impossible to tell how many false reports were actually filed. Any convicted criminal in any of these courts who have been charged within the past few months may have been the victim of an unjust system.

As this case is unusual, the University of California at Davis law professor Elizabeth Joh doesn’t know exactly what this system error means for the court or the victims. She considers what would happen if a system error that leads to wrongful arrest leads to investigation for a separate crime. She wonders what would happen, say if a second investigation led to drug evidence.

In 1994, the U.S. Supreme Court made a decision that allowed prosecuting attorneys to use evidence seized during an arrest, even with an invalid warrant, since the police made the arrest in good faith.

There is no answer at this point in time, only potential theories. For these cases, anyone convicted of a crime they didn’t commit needs a criminal defense lawyer that will work hard for you, no matter the circumstance. Whether you need a sex crime attorney, a theft lawyer, DUI, or domestic violence lawyer, if your charges were falsely handled to you, you don’t deserve another single second behind bars. You need a criminal defense lawyer who believes you and realizes that this is not your fault and that the system is broken.

Each year, 10,000 people are wrongfully convicted of serious crimes. Don’t give up if you’ve been falsely accused or convicted, Call criminal defense lawyer Kia Champion for the highest level of legal representation possible.