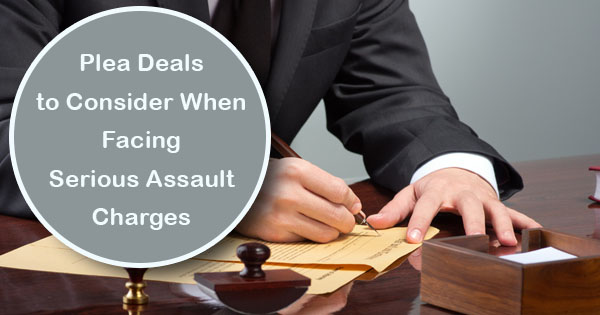 In an assault case, the prosecution and defense may compromise to reduce the defendant’s charges. This is known widely as a “plea deal.”

In the case of a plea deal, the defendant pleads guilty or no contest to one or more of the charges brought against them under specific circumstances set forth by their assault attorney and prosecution. The following are examples that an attorney might propose in order to lessen the defendant’s time served.

Sentencing with Jail Time
Sometimes time in jail cannot be avoided. These cases are often the result of:

Sentencing with No Jail Time
If the defendant’s criminal history is minimal or nonexistent, it is possible for a assault attorney to agree to a full sentence without a jail sentence. The defendant would serve the extent of his or her sentence on probation, under rigid circumstances, and must comply with the probation terms accordingly.

After the completion of probationary time without issue, the charges may be dismissed. The court does not reach a conviction unless the defendant, whose sentence had been deferred, commits another crime while on probation, or violates the terms.

It is also possible for the defendant to be convicted of the crime, but serve the sentence on probation without jail time. The charges will not be dismissed. This is known as a suspended sentence.

Diversion Program
Some states offer diversion programs, which are rehabilitative requirements that the defendant must complete to avoid conviction. He or she does not plead guilty or no contest to the charges, or appear in trial, and simply completes the designated program. These programs often include anger management, drug or alcohol rehabilitation, or therapy sessions. There are additional terms that are often outlined, and the defendant must meet with a probation officer regularly to prove that h or she is meeting the requirements of their sentence.

In many cases, failure to comply with the terms of the diversion program requires an automatic guilty plea.

Pleading to a Lesser Charge
The defendant may plead to a lesser charge in order to avoid a more severe sentence. This is often used when the assault in question is a more minor altercation, like a bar brawl or fight in the street. The defendant may plead guilty to disorderly conduct. In order to plea to a lesser charge, the victim of the assault must not be particularly vulnerable, seriously injured, or a family member.

Regardless of the circumstance of an assault, every defendant deserves the highest level of legal representation with a highly respected lawyer. An assault attorney is necessary in order to face charges with confidence, but over 10,000 people are convicted of serious crimes each year because their attorneys did not work hard enough to achieve justice. Kia Champion, of Champion Law Firm, is a criminal defense lawyer who will work hard for you, and represent you fairly.